A downloadable game for Windows

Kinda like how self explanatory the game is. Start out just kinda going forward wondering what is going on but it dawns on your slowly.

Interesting. Somehow I expected this to be turned into electricity current or to go with some digital theme. Now that you made it into frog theme, though, it reminds me of the old game "Frogger" and makes perfect sense! Can't think of a "thematic" reason for the lines to appear between the water lilies though.

The frog and the leaves look cute, and it's very clear you can't jump on broken leaves. It's more obvious what's going on the game now.

Could've had water in the background, or at least have it be water-colored. The gray color makes me think of asphalt, so it doesn't make much sense to me to have so many water lilies on the road.

The menu buttons look better, but could've been nice if they also went more with the frog theme.

The music doesn't fit this version as well as it did before though, might've gone with another song. Loved the frog sounds though!

Thanks for the input. I was quite limited in what I could actually mod; the music and grey background are hard-coded. You're right though, it would be better with those things changed.

Oh no! I forgot to put the main background moddable 😑 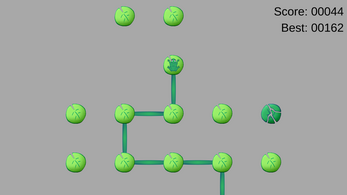